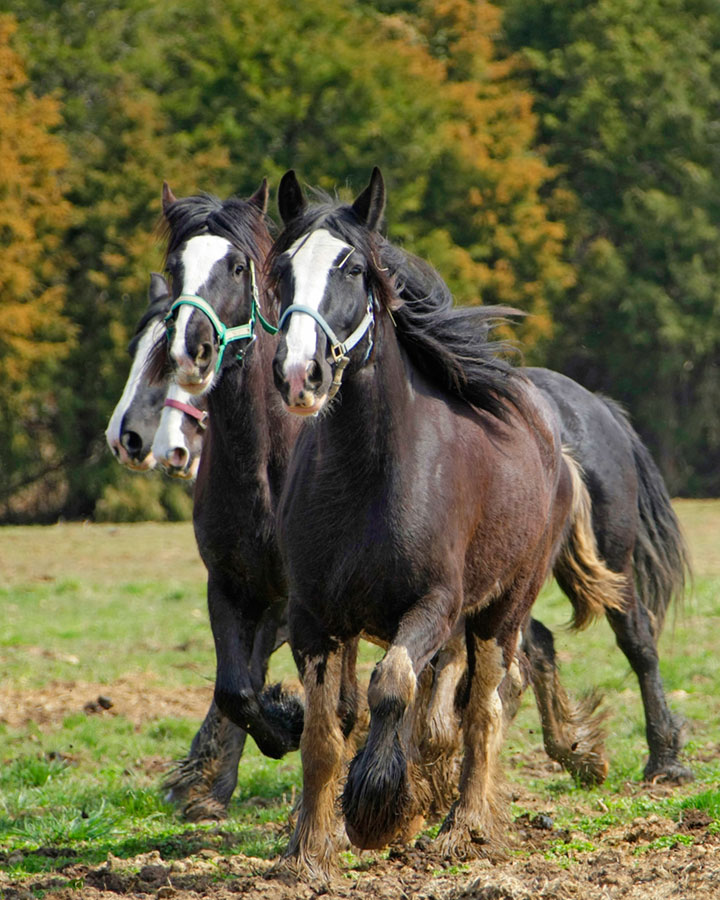 It’s hard to write about one’s dreams sometimes. Nothing achieved at Passage Creek was achieved by me alone. Everything is the result of many people’s time, dedication, support, and love for the Shire horse.

I never heard of Shires until 1993 when my next door neighbor took me to Hideaway Pond Shires, owned by Perry and Betty Andrews, in Manassas, Virginia. Their home became my “home away from home” in a very short time. They opened their barn, their home and their hearts to me and to many others.

Their imported Shire Stallion, Garreg William, became my friend and confidant. I learned about the kind and attentive personality that is the Shire Stallion. He was everything a Shire should be – a quiet safe riding horse, an even tempered and respectful breeding stallion, and very aware of when he was on display or in competition. He was the first shire I saw who posed for the camera. Perry Andrews was (is) very innovative, becoming one of the first, if not the first, Shire Breeder to take advantage of the benefits of frozen semen for William. Although he passed away at a young age, William has had a major influence on the Shire Breed in the US. Several Shire Breeders have made an effort to maximize William’s qualities in their breeding programs through frozen semen and his offspring. I am one of those. Perry and Betty made a careful and thoughtful selection of their mares, finding mares at Tally Ho Shires, operated by the Parrington family. Their farm must have been empty after Perry and Betty bought their mares.

I helped with babies each year; I and my friends rode the mares and William. We trained babies and groomed and played.  When Perry and Betty announced that they were going to retire from the breeding, my only reaction was a selfish one – “what about me?”  I was totally involved with their horses for 5 glorious years.

My own Shire farm was the solution.

With Perry and Betty’s help and a posse of other people, we found one in April 1999.  My first two mares were from Hideaway Pond.  Tally Ho Terpsichore and her daughter with Garreg William, Psyche of Hideaway Pond.  Terpy was the Grand Dame, mother and grandmother supreme.  Psyche was the most beautiful horse I had ever seen.

In 2002, again with the kindness of Susan and John Knox, Terpy was bred to Illusion Farms Mister Sampson, a magnificent son of Garreg William’s. Psyche was bred to the beautiful Triple-Registered Davi Quebec Amik, owned by Rick and Paige Peck of Forge Run Farm.  In 2003 we had Passage Creek Jazz Perfection and Passage Creek Harmony.

In 2002, I fell in love with a “baby picture” in the American Shire Horse Association Newsletter of a colt called Mastermind, owned by Clark Jenson of Jenson Shires.  His attitude and looks reminded me of Perry’s foals.  Clark said he was not going to be for sale.

When Perry and Betty looked for a stallion to own at Hideaway Pond, Perry sought the advice and guidance of Arlin Wareing.  Perry went to England with Arlin and they traveled about looking at colts.  Perry fell in love with William and so he came to Hideaway Pond.  I asked Arlin to help me find my William. In 2003 I received a group of photos and videos from Arlin’s trip to England.  I selected Hillmoor Black Supreme, 18 months old.  There isn’t much you can do with a name like that, so I named him Willie.  He’s not a copy of Garreg William, however, he is himself.

I was very satisfied with Willie, but one day was “surfing” on the shire websites, and saw that Jenson Shires had a son of Garreg William for sale.  I just called to ask about him, just tire kicking and snooping.  Clark Jenson was overburdened with stallions.  He had sold the colt I asked about. He said he had too many stallions and had to get rid of ones he had intended to keep.  I asked about Mastermind.  I’m not sure who talked who into what.  Who needs two stallions?  I didn’t, but……

Arlin once again helped me to acquire a wonderful mare from the UK, Jacobies Rhianna, in foal to the National Champion Shire Stallion that year, Trem Y Wyddfa Mascot.  With Perry and Betty’s agreement and support, I also purchased Hideaway Pond Aurora, one of their babies, from Ayrshire Farm.

In 2006 we (Rhianna and Mascot) produced Passage Creek Chopin’s Heart, a stallion now residing at Ayrshire Farm (His barn name is Freddie), and Magnus and Aurora produced Passage Creek Southern Cross (Crosby) who resides in Texas (Born on Cinco de Mayo).  Both stallions have produced their own foals.  We are very proud of the legacy.

Magnus and Aurora produced a truly magnificent filly in 2008 Passage Creek Northern Lights (Brighty).  She is owned by Gayla and Russ Verbofsky, two people who arrived at the farm by chance and changed my life completely with their wisdom and talent.  Passage Creek Harmony came back to us through the courtesy of Mary Totin and Al Davis.  Magnus and Harmony produced Passage Creek Melody that year, and Willie and Rhianna produced Passage Creek Kentucky Rain (Tucker).  Tucker is going to carry on Willie’s legacy.  He is now owned by King’s Symbol Farm.

In 2009 Willie and Rhianna had ”Passage Creek Honor Their Memory” born on Memorial Day weekend.  Honor has the best of each parent.  She has Willie’s obedient nature and Rhianna’s sweetness.

Vernon and Mary Butler agreed to sell me Hideaway Pond Coppelia, another of Perry and Betty’s babies.  She is truly a treasure.  In 2010 she and Magnus had “Made to Serenade.”  Serah is statuesque like the beautiful Brighty and has the sweetness of her mother and Aunt Aurora.

Terpsichore the Grand Dame has passed away at 22, as has Aurora, Rhianna and Harmony.  No one escapes sadness.  The loss of these mares in the past few years was devastating to me and to everyone who knew them.

We also lost Betty Andrews this year to cancer, an event I am still trying to make sense of.  I will miss her strength and practical approach to life.

I was lucky to be able to lease Walkabouts Amazing Grace who is expecting a foal with Willie June 2011, and Woodruff Renaissance (yes, daughter of Fox Valley Deliverance, bred by Susan Knox).  Magnus and Rennie gave birth to Passage Creek Poetry Man (Poe) on April 26, 2011.  Poe is the most fun yet.  Laid back and in charge of the world at 1 month old—a typical Shire, king of all he surveys.

And so the cycle continues.  Passage Creek Minuet (renamed Monet by her owner) was purchased by Sue and John Knox a few years ago.  So Monet is “home”.  She is a backbone in Sue’s Woodruff Riding School.

We are looking to the future to see what it brings and waiting on a baby.  It’s breeding season once again. Please visit the farm if you have a chance so you can meet these amazing horses.

My thanks to my mother, Grace Wells, for her moral and financial support. To Jessica Bacot, Ashley Shilling, Russ and Gayla, Kyle Bascom, the entire Gray family, and Angel Rodriguez.  Thanks to those who were there at the rocky gritty beginning, including Scott and Carol Gatto. A special thanks to Sharon Henderson, Jinx Murray, Susan Knox, and Ashley Shilling for many years of friendship.  Ashley was there at Perry’s for the beginning of it all.

Thanks to Jack and Matthew Craig for waiting and believing.